Book Review: Back in Control

“The extent of the pain you feel depends on the number of neurons firing in your brain.” So says David Hanscom M.D. in “Back in Control”, the book that is touted as “a surgeons roadmap out of chronic pain.” The author journals his chronic pain journey and how he was able to regain his life. He chronicles the tools he used and also the tools he teaches his patients to gain control over their pain.

When he first became a surgeon he performed many surgeries a year but after his descent into pain and finding his way out again, he dramatically changed his criteria for patients needing surgery. He found if he had them go through a regimen of 8 weeks using his prescribed tools, many of them no longer needed surgery. In fact when he tells how often back surgery is actually successful, the numbers are bleak.

Is there a solution? Dr. Hanscom says yes! He believes modifiers like lack of sleep, stress, anger, victim mentality, perfectionism and losing hope, all contribute to more pain. The good news is there are things that can turn the downward spiral around. Thing like expressive writing, meditation, sleep, forgiveness and creativity. Since repetition is the key to reprogramming your nervous system, Dr. Hanscom recommends making a plan, such as a vision, to move out of the dark place of chronic pain.  And practicing it daily helps you to regain the parts of your brain that pain has claimed.

Although his prescribed program is not as simple as taking medications for your pain, Dr. Hanscom is quick to point out that even meds are not a long term solution. He says, “The most disturbing aspect of opioids is that they increase the sensitivity of the nervous system”. His recommendation is to focus on things that calm the nervous system since MRI scans have shown that the brain’s response to pain impulse increases 500 percent after being in pain for more than three months. Education, exercise and engaging in nurturing activities are the best way for people in pain to get “Back in Control.”

Find the book on Amazon > 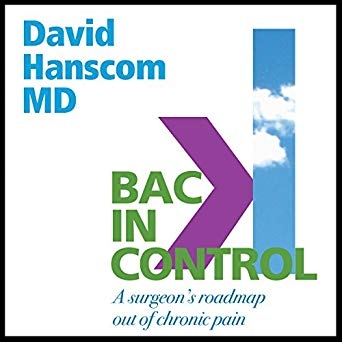 Kendy lives in northern California with her husband of 38 years and twin daughters. She loves spending time with her grandchildren, reading, quilting, anything outdoors, while helping people find their path out of pain.

About the Author: Kendy Anderson

Kendy lives in northern California with her husband and daughters. The mother of six children—some grown, twin daughters still at home—and a grandmother to five, she raises poultry, enjoys scrapbooking, sewing and gardening, and loves to read. She lives with several pain-producing conditions but hates to miss out because of pain, so she loves coping strategies—choices she makes daily that have her back to “doing life,” rather than being a spectator or withdrawing completely. After being coached for her own pain, she made the decision to take coach training. As a TCC®U- and Nationally-certified coach, she helps clients learn pain management skills and return to happy and productive lives. She wholeheartedly believes it is possible to change your perception about pain.

Keep up to date with TCC’s blog.